My name is Elisabeth Egner and dogs have been always part of my life. 1990 I saw my first Shih Tzu, and it has been like love at first sight. In 1991 I got my first two Shih Tzu, and became interested in dog showing. My bitch "Fendi vom Pfälzer Wald" acquired her Champion title. Both of the bitches come from old english bloodlines.
In 1994 I registered my kennel name Mandarin Garden's.

Since then I am breeding under FCI rules, and dogs out of my kennel are shown in Germany, Europe and UK. In 1995 I acquired my male, Champion "Prince Kalaf vom Heydpark" Prince has played a big influential poart in my life and kennels. His breeding goes back to old Greenmoss bloodlines.

For Prince I purchased two bitches from England from Superlion kennels. Both of them gained their Champion titel very quickly and produced beautiful puppies. From the mating of Prince to one of the mahagony bitch Superlion Mandarin Garden's, a beautyful bitch puppy was born, Mandarin Garden's Incense (Ici). Ici is now an International Champion. From her ofspring Mandarin Garden’s Dare To Be Black stayed in our breeding program and are shown at the moment.

In the year 2007 I imported another Superlion bitch. Superlion Identified, she is a beautiful red and white bitch, but since she had a scar on her eye I could not show her anymore.

You wil find many photos and more information on my homepage. 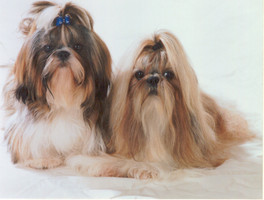